I’m a big fan of Malin Akerman, the pretty, funny girl who played Katherine Heigl’s dubious sister in 27 Dresses an who played Vince Vaughn’s wife in Couples Retreat.  She’s cute, talented, and beautiful.  However, she might be one of those rare exceptions I think is prettier as a blonde.  I have a thing for dark hair and light eyes…it’s the sexiest look for a guy or girl.  Yet, there are some women and men that just look better blond and Malin is one of those ladies.

She stepped out to support her new film The Bang Bang Club at the 2011 Tribeca Film festival in NYC this past weekend. Making its debut at the event was Malin’s daring new hairdo, a transformation from her usual golden locks to a much darker and deeper hue.  The 32 years young actress is gorgeous, there is no question about it, but I’m not too sure about the brunette hair.  Perhaps it’s the ugly dress (I know orange is in for Spring 2011 but I’m not liking it) or maybe it is the fact that it is slicked back and I am not giving the dark hair a fair shot.  Either way, I prefer her as a blonde.

Here are some pics, I’d love my readers’ opinions.  Yay or nay on the brunette?  I have included some blonde pics below:

Here she is in Watchmen as  bruenette and I like it….maybe it’s the bangs: 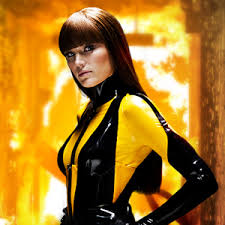