o recently I hooked up with a guy to try to get over my ex.  I know, not my most brilliant idea but we all do stupid things when we are hurting.  Well this guy and I hooked up a few times and had made tentatively plans to actually go out on a date.  I wasn’t really that into him but I needed to try to move on from the guy I was dating and I thought this could be a fun distraction.  Now, today I got news that he will be coming to the bar we’ve been hanging out at each Friday with a new girl.  I did not hear this from him, I heard it from a friend but despite not even having feelings for him I find myself with tears welling up in my eyes.  It’s not that HE dumped me, but that he DUMPED me. 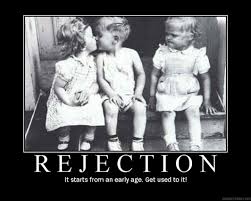 Rejection is a sad state of affairs.  It makes us feel like shit and can strike us out of the blue.  We can be living in relationship bliss with someone, hopelessly lovestruck and clueless when BAM, we get dumped.  We rack our brains to see what we could have done wrong, immediately choosing to  blame ourselves whether we did anything wrong or not.  The reality could be that you did not do a thing wrong and he tells you honestly that this is by no fault of your own yet you will still reproach yourself because it is in our nature.  What hurts more sometimes than the loss of a relationship is the feeling of being rejected.  You could not even like the guy and be wanting to end it all along but the moment he ends things with you, you hurt because someone was essentially telling you that you weren’t good enough for them–that you didn’t make the cut.  Being rejected is like being told you aren’t worthy or that they want someone better.  It hurts most of all when you actually put your all into a relationship and really give yourself to someone and open yourself up to love only to be cast aside because that feeling isn’t there on his end.  Yet, it also hurts almost as bad when a guy you don’t care much for shows up at a bar with some girl other than you, effectively telling you that you were not good enough for him.  You can’t help but wonder why you aren’t good enough or what went wrong.

We women allow rejection to consume us and swallow us whole.  We become a slave to it, allowing men to make us feel worthless.  Well it’s times like this I attempt to cheer myself up with the words of Eleanor Roosevelt, “No one can make you feel inferior without your consent.”  This is so true.  Feeling worthless, rejected, dejected, inferior, are all things that you ultimately have the control over.  These men can’t make us feel valueless without you allowing them to.  Sure this concept of just willing ourselves to not feel hurt and hollow is easier said than done, however it is the only way to overcome rejection.  Instead of thinking, “what did I do wrong?” we should be thinking “fuck him, he doesn’t want me, he will regret it and I will find someone better anyway.”

I was so hurt when the last guy I dated dumped me because I felt as if I did something wrong, as if I wasn’t good enough.  Yet, I should never change who I am or allow myself to feel that I’m not good enough because some guy didn’t want me.  I should have been thinking that this whole thing was his loss because I am a great girlfriend and a great friend and he will be missing out not having me in his life.  Sure we are friends still and some say that I shouldn’t allow him to still get to have the best of me in his life but the truth is, I need him.  I’ve grown so accustomed to him being in my life and being the one I turn to that to lose him entirely would be too much to bare.  Maybe in the long run staying friends with him will hurt,  but in the short term it’s what I need despite his rejecting me.

So tonight, while this guy is going to show up at our regular bar with some new girl, I have a plan.  Rather than stay at home and wallow and cry, I’m going out.  I’m going to look hot, have a few drinks, and do my best to have fun anyway.  Who knows what booze will do to my wounded soul but let’s hope my party self comes out, not my maudlin one.  Regardless of my emotional state, I will be dressing up and headed to our bar to show him that I can have fun and be cool with him being with some new chick (even if I’m really not) and maybe, just maybe, he will want me.  But when he does, because at some point in time if not tonight, he will realize what he missed out on and will come crawling back, I will reject him and that will be the ultimate victory.